Established in the 1800’s by the Hearns family, 603 Walnut Street in Carthage served families in the Carthage area in three centuries. After the Hearns family retired in 1943, the funeral home was purchased by the Jackson family and was operated by them until their retirement in 1954. It was then that Henry and Lillian Neiser moved from Chicago to purchase the funeral home.

During their ownership many renovations and additions were made to the funeral home, including the casket selection room. In 1988, Lillian Neiser wrote a letter of recommendation for James D. Printy, a Hancock County Native, for entrance into the Worsham College of Mortuary Science in Chicago, where Henry Neiser had once taught. After Henry’s death, the DeJong family, already established in funeral service in Iowa, purchased the funeral home and operated it in the 1990’s. On March 1, 2000, James Printy purchased the funeral home and it became Printy Funeral Home.

For over 110 years the funeral home at 603 Walnut Street, Carthage, Illinois has been family owned and operated, providing the finest in funeral service at reasonable prices. On June 1, 2008, Jim and Melissa Printy purchased the Carthage branch of Lamporte Funeral Homes on 405 Cherry Street, moving the location of the funeral facility.

Constructed in 1982 by licensed funeral director Bruce Leathem and his father, George, it was the first building in Hancock County to be built exclusively for a funeral home use. A one-level facility with an expansive chapel, large family room, sitting area, arrangement office and refreshment room, Printy Funeral Home provides a warm, comfortable facility for funerals and visitations.

In 2013, Evan Printy graduated from Carl Sandburg College in Galesburg, Illinois, with his degree in Mortuary Science and came back to Hancock County to work at the funeral home as a licensed funeral director.

On May 4, 2014, Printy Funeral Home opened their new location in Warsaw, Illinois. The new facility was designed with large handicapped accessible bathrooms and one of the largest chapels in the area.

Jim and his wife, Melissa, life-long friends and natives of Hancock County were married in 1990 and are the parents of eight children: Evan, William, Elaine Grace, Philip, Patrick, Faith, Emma, and Tessa. The Printys are of the Christian faith. 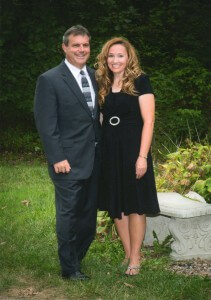